How to Reduce your Food Wastage

Recently, the news was awash with an understandable amount of outrage when supermarket shelves were being emptied by panic shoppers with a penchant for pasta, rice and two-ply toilet paper.

This issue was compounded by the images that surfaced on social media a few days later, seemingly showing an excessive amount of food being wasted and left out for the local bin collections.

The images that initially sparked outrage were taken by Derby Councillor Ajit Singh Atwal, who took to his Twitter to share his disgust.

It has since been suggested that the food waste pictured could well be attributed to international students, who were clearing out their accommodation before heading home upon the announcement of the lockdown.

Regardless of the issues around panic buying and stockpiling, excessive food wastage is a shameful circumstancein a time when food supply chains are already strained and some, including NHS staff and other key workers, are having to go without.

The Waste & Resources Action Programme (Wrap) reported that the UK wasted an estimated 9.5 million tonnes of food in 2018. Whilst these figures include hospitality services, manufacture, retail and wholesale sectors, 70% of this estimated amount is attributed to UK households, at an eye-watering weight of 6.6 million tonnes.

That doesn’t mean that there’s nothing to be done. These days, we all consume a greater amount of fresh food with a shorter shelf life. Best Before and Use By dates are a major factor in deciding which food ends up in the bin and which ends up in our bellies. Getting to grips with the guidance can have a huge impact on minimising the volume of food that is wasted by households across the UK, whilst lessening the impact on your pocket too.

Often a cause of confusion, ‘Best Before’ dates are simply a guide to the food’s quality. The food may not be at the same level of quality as when first purchased, but is still safe to eat after this date as long as it has been stored in the suggested conditions.

Conversely, once food has passed its ‘Use By’ date though, there is very little that can be done and the Food Standards Agency guidance states that the food should be disposed of.

Having said that, there are some simple shopping hacks which can help you to reduce your wastage. Buying fresh meat or fish, only to freeze and defrost it before you plan to eat it has a dramatic effect on the amount of food disposed of. This also goes for breaking down bread and freezing half of the loaf for a later date or using ageing fruit to make a pudding just like your grandma used to make.

It’s inevitable that some food will always be wasted; we’re all busy people after all. But the above are some easily implemented steps which can help to bring those wastage figures down by at least a VW or two.

Even then, there are options available other than simply throwing the food away. Amongst others, businesses can take advantage of Fare Share, who specialise in redistributing unwanted food to charities and community groups. Such organisations are on the increase around the country in a bid to ensure that wastage figures are kept to a minimum whilst those in need no longer go without.

Food banks have become more common in the UK too, with new operations developing up and down the country. These are becoming easier to access for people wanting to make donations as well as those who are looking to use the service. The Trussell Trust, for example, is always looking for donations of cereal, soup, pasta, rice and tinned meat and vegetables and donations can often be made through your local supermarket.

Whereas the panic buying may have now subsided, it’s time that the food waste figures do too.

Sometimes though, organic food waste is inevitable. Should you get into a situation where your bins even partly resemble those photographed by Ajit Singh Atwal, then you’ll likely be in a situation where local bin collections will refuse to remove any waste which is not contained in an enclosed bin. The good news is that Clearabee can help, although please contact us directly if your waste is mostly raw meat and/or fish.

Perhaps you’re already being affected by the reduced waste collection services currently being operated by some councils. If so, then it’s worth knowing that our ‘man and van’ rubbish removal service is the UK’s largest with the most reviews on TrustPilot.

In most cases, we can attend your property on the very same day to clear rubbish and remove waste from almost any interior or exterior. Contacting our office with photographic images means that you can get an accurate estimate of the costs involved in having your waste removed.

Alternatively, you can simply pay for a flat call-out fee, and our field staff will assess the cost on site. Once the job is complete, our field staff will issue an electronic Waste Transfer Note to give you the confidence that your waste has been disposed of responsibly.

Of course, if you have more household rubbish that needs removing whilst we’re there, we’ll be more than happy to oblige.

Removing rubbish. It’s what we do. 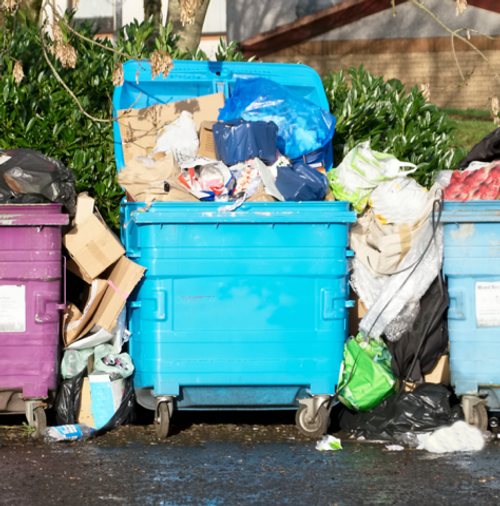 What to do About Overflowing Rubbish Bins 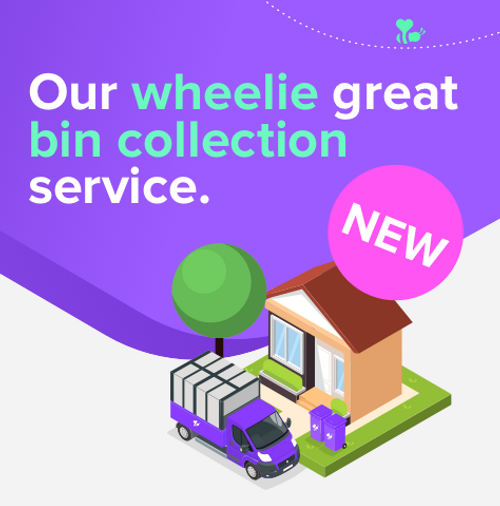 Every Day is Wheelie Bin Day 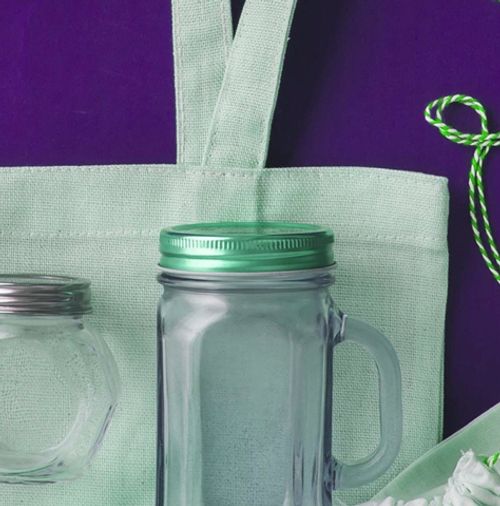